Why I joined a choir

An unspeakable day. Icy horizontal rain and the sky clamped down over the city like a grimy pot lid. The sort of afternoon that makes you think: There is no end in sight, only winter for our sins until we die.

Searching for respite, I stumbled into my local café and found the place steamed up with muffin crumbs and shrieking children – the liability of living in a “family” neighbourhood. I bought a hot chocolate and slunk into a corner for my sugar high and that’s when I saw the sign. It was scrawled on piece of half-ripped paper and stained with a tea ring: “Female singers needed for a neighbourhood choir,” it said. “We rehearse Wednesday evenings. Call Dan. DON’T DELAY!” 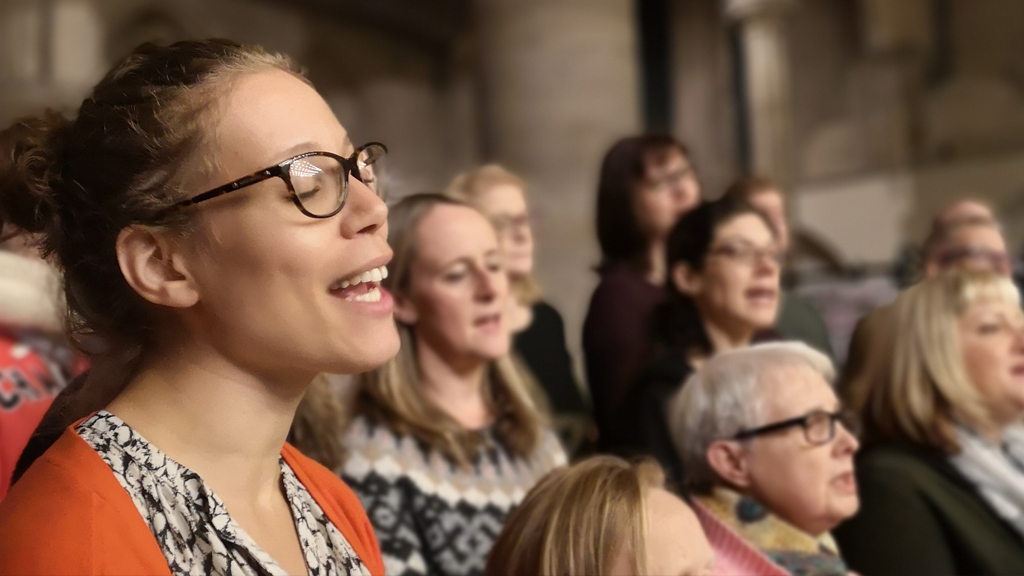 Following Dan’s command, I found myself dialing the number and agreeing to turn up the following evening to rehearse in the gymnasium of a local primary school. It was where, tummy full of tea and biscuits, I would burst into happy tears while singing the soprano part of Simon and Garfunkel’s The 59th Street Bridge Song. Afterward, I said goodbye to the other choir members and stumbled out into the winter’s gloom. The death clamp between my shoulders had miraculously loosened. The persistent hunted sensation of having lost something important I’d never quite managed to acquire was, for the moment, gone. I was changed, and I wondered why.

What is it about singing in harmony with other humans that changes the way we feel and think?

British scientists have recently found that choirs boost the mental and physical health of their members. Researchers from Oxford Brookes University studied 375 people who sang alone, sang in choirs and played team sports, and found that the choristers experienced the greatest benefits by far. Earlier studies have found choral singing to have benefits for people suffering from depression, lung disease, high blood pressure and Parkinson’s. One study even found that choral singers unconsciously synchronize their heartbeats with other choir members. Psychologist Nick Stewart, who led the Oxford Brookes study, speculated that “it could be that singing in a group gives us something that we have lost as a society.”

So it’s no wonder choirs are popping up everywhere these days. Here in the U.K., the organization Making Music, which supports voluntary choral groups, has seen its membership double in the past two years. And it’s not just because of Glee and The X Factor. The BAFTA-winning BBC documentary series The Choir follows a London Symphony Choir Master as he visits various workplaces, starting life-changing singing groups among firefighters, office workers and school children.

My friend Lenni Jabour, an accomplished songwriter herself, sings every Tuesday in a choir gloriously named Choir! Choir! Choir! It’s in the west end of Toronto, and they rehearse in a bar where choristers drink mojitos and sing genius choral arrangements of pop songs like Daft Punk’s Get Lucky. Organizers video each rehearsal and post it on YouTube so participants can share it with friends. According to Lenni, it’s a bit like participating in an impromptu concert every week. More importantly, it makes her deliriously happy. “We’re always encouraged to sing as children, and then you grow up and, unless you go to church, when do you sing?” she says.

Singing in a choir is a transcendent experience – and there aren’t many of those in life. It instills gratitude and bliss without the contortions of yoga or hangovers of alcohol. Singing doesn’t just make us feel better – it makes us better people. By singing in a group, we choose to recede for a moment from selfish concerns and pursue harmony with those around us.

Last week, Dan the choirmaster walked me out. I thanked him for putting up his sign and he thanked me for joining. “You’ll sleep well tonight from all the singing,” he said.

Why you should join a choir

Music has the power to break down barriers

All over the UK people are uniting and making new friends from different walks of life. They are breaking down barriers and standing shoulder to shoulder. How and why are they doing this? They are joining choirs!

Choirs come in all sorts of styles from classical and choral to showtunes and rock music. I guarantee there is one round the corner from you. I urge you to give them a call and go along to a session. I promise if you find the right one for you that you won’t look back.